As members of the Great Britain Over 75 team, we came to Umag in Croatia confident that we could retain our World title even though the French team would be stronger this year.

Frances Maclennan and Jenny Waggott duly saw we won through to the top three play-off against the USA and France.

Jenny won the first rubber against USA and Fran was a point away from winning her first set when she pulled a muscle in her calf. Though she won that set, she struggled in the second and had to concede. 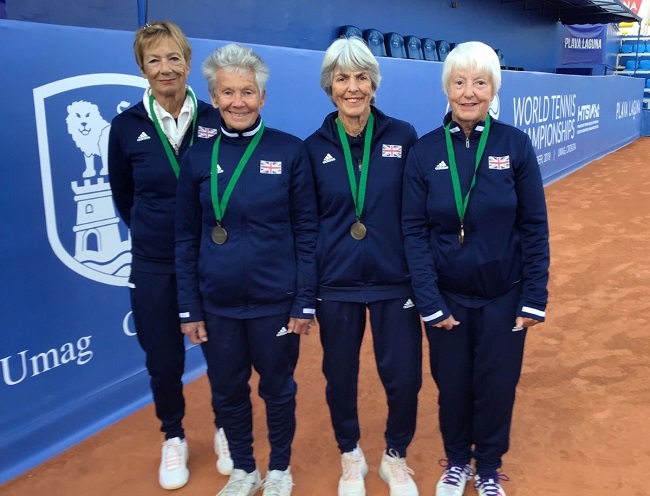 We had already lost our number four because of an off-court injury before the tournament started and I had played just one rubber, winning the doubles against Australia. I was therefore pitched in to play the deciding doubles against the USA alongside Jenny. She is a joy to play with, but far more experienced at this level than myself. We had our opportunities and could well have won, but went down 4-6 in the third set. This effectively meant we were unlikely to achieve gold.

The next day, I had to play Singles against France, having played only doubles at this stage. I did not feel overawed against her and started confidently, but her greater experience and ability soon showed. I lost 6-2 6-2 but had a number of game points which I could not convert. Jenny had an amazing 3-hour win against their No. 1. So we had another vital doubles. It was a very close match, but we fell short. So we have come away with the bronze medal. France took gold, USA silver.

I look back on the week with a great deal of pride and satisfaction, and the team spirit was excellent.

The Men’s Over 75’s included former Davis Cup players Mark Cox and Roger Taylor, but their team could only manage 9th place (in a group of fifteen countries) – an indication of the strength and standard of tennis at world level.