East Glos member Felicity Thomas has returned from Orlando, Florida, with a Bronze Medal from the World Super Seniors Team Championships – she played for Great Britain in the Over 75’s.

At the initial stage, Great Britain was drawn in a very strong group with South Africa, Australia and France, who were seeded 3. They beat both first two countries 3-0 but lost 1-2 against France. However, by beating the French No. 1, Felicity secured top spot for GB and earned a play-off for the top three places.

Against Germany, she had to play Heide Orth (Germany), many times a World champion. She had a close first set, but Heide’s experience and expertise told. GB lost 0-3. Against USA, she played Charleen Hillebrand, another former World champion. Levelled at 1-set all, but lost her momentum after the obligatory 10-minute break. GB lost 0-3.

Felicity played no doubles – it would have been too exhausting, with only a short break after singles. The others played their full part, and she would not have been able to do any better. It was a team effort, and they were delighted to have reached this stage and earned a bronze medal. USA won the title, their eighth year running.

32 green clay courts were used at the USTA National Campus, which opened in 2017. There are another 70 courts of different surfaces used for training and so on. In many ways, the facility is extremely well-planned and equipped, but it lies immediately below the flight path into the busy Orlando International airport, very close by. It is very noisy at times. More importantly, it was extremely hot and humid with little cloud cover. Most days, even at 5pm, it was 85/90 degrees.

GB entered teams for all five men’s age groups, 65 to 85, plus four ladies’ teams, 65 to 80. Only one other team came away with a medal – ladies 65s who also won bronze. Usually, GB fares much better and combatting the heat must have been a significant factor.

The second week is devoted to the Individual Championships, singles and doubles. In the third round Felicity had to play Sheila Weinstock (USA), both losing semi-finalists last year – so this was bound to be tough. Play started at 12:15, with a 90 degree temperature, as hot and humid as any day. Felicity pulled back to 1-set all. But playing singles 7 days out of 9 at this level proved too much. The match lasted two hours and forty minutes. She won a bronze medal in the Doubles with Ruth Weston (Surrey).

Felicity was pleased with her achievements but would think very hard before returning there in similar circumstances. Her ITF ranking now number six in singles, but up to number two in doubles.
Donna Fales (USA) was unavailable for the team event but, in the Individuals, she won Singles (runner-up Heide Orth), Doubles (with Heide) and also the Mixed. She has put forward Felicity’s name for the Rest of the World to play USA next June in the Friendship Cup. Held in Austria, it is by invitation and subject to subsequent selection. She should hear by the end of November but would love to participate. 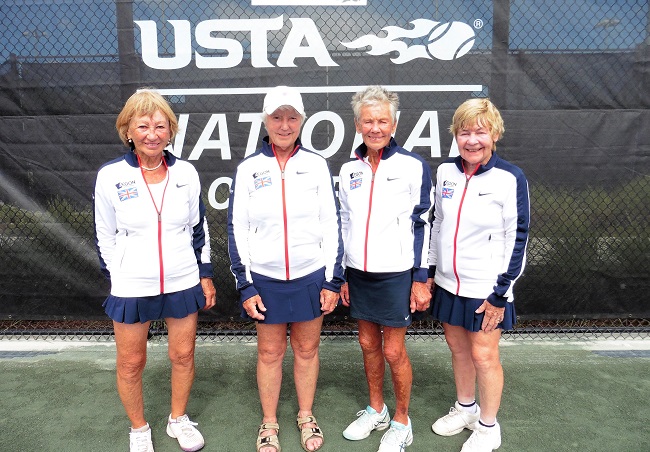 Photo: Felicity with husband Gordon at the Players Restaurant looking across one of the lakes at the USTA Campus 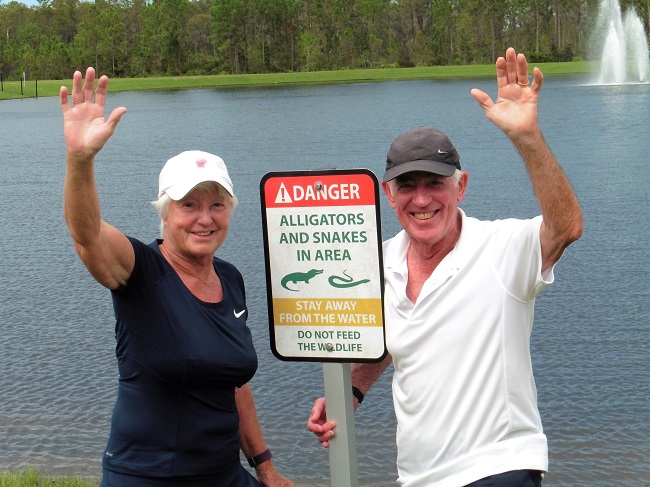