For the first time in its history, East Glos hosted a padel regional competition last weekend. In addition to the two East Glos teams in group 3, we welcomed Somborne Padel Club and Jet Padel from Thame on what turned out to be the warmest and sunniest day of the year so far. 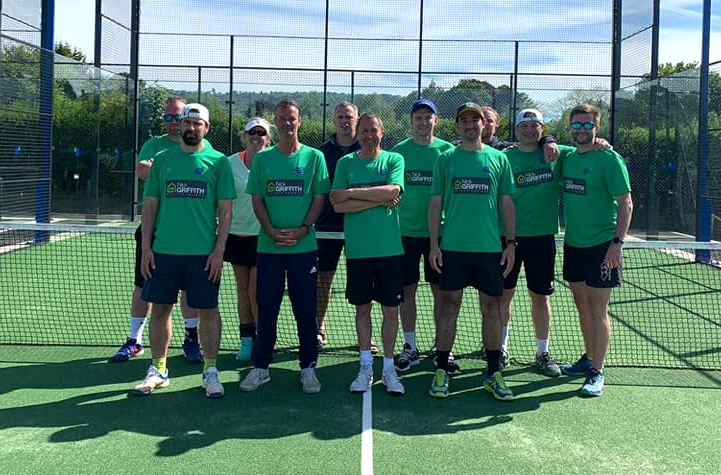 After a quick tour of the club’s facilities, the two semi-finals started at 10am. Without knowing the standard of the opposition and as the captain for East Glos, I was a little nervous about finding out how tough it would be for us padel toddlers. A crowd gathered and showed great interest in the new sport. Each fixture took place in the following order of play: pair 3v3, 2v2, 1v1. East Glos A faced Jet Padel, and East Glos B sparred with Somborne.

East Glos B had a tough start against a strong Somborne side. Although many games went to deuce, the away team managed to take them. However, the Somborne side proved to be too strong for our B team and got through to the final with a 3-0 win. In the meantime, East Glos A was fighting against Jet Padel on court 2. After a rock-solid start from our number three pair, Colin and Neil, East Glos was ahead with a 2/0 first match win.The second match ended with another win for East Glos, meaning there would be a home team in the final. That would defend our chances to go to the National Tennis Centre in October for an opportunity for promotion to the national competition next season.

After a short lunch break in the scorching sunshine, the group final – East Glos A v Somborne – started at 1pm, with an even larger crowd cheering on the teams. It was great to see the support from the club members and families, and we didn’t know how much we would need them later in the afternoon! Colin and Neil repeated their performance of the first match and played even better. They didn’t let a chance to the away team and won 6/2 6/1. That helped us to start the final with momentum and confidence.

Number 2 pair, Lumi and I, were up against excellent defenders, which was our strength too. We got broken early in the first set and, at 4/3 down, had an opportunity to break back. Unfortunately, we missed this chance and lost the first set 6/3. Although most games went to deuce in the second set, we lost the match 6/3 6/1.

So it was down to the #1 pair of Jaime and Al to get the job done. They had to beat a duo composed of a former professional squash player and a current GB rackets player. Not an easy task! The East Glos pair did not start the match in the best of ways, losing their serves twice in the first set and not playing their best padel. The start of the second set was crucial to get back into the match and keep our hopes alive. Luckily the crowd kept pushing.

Jaime and Al did not manage to hold their serve at the beginning of the second set and were trailing 3/4 and a break down. At this point, there was not much hope left, and the crowd was tense. That was where the momentum shifted and when the EG top pair started winning the longer rallies. First, they came back to 4 all, then they led 5/4 and managed to break to win the second set 6/4 to take the match to a match tie break. But, with the crowd pushing so hard behind them, the East Glos pair never looked back and won the decider and final game 10/7.

Thanks to the incredible efforts of the teams, we managed to win this group, and we will be going to the National Tennis Centre London in October. The celebrations carried on to the clubhouse. Thanks to the catering staff, we shared a great afternoon with pizzas and drinks on the patio with the away teams. Practice matches at their venues are already in the pipes for this summer. That is what sport is about!

Overall this was a great day, and padel was always going to be the winner. I am delighted for the players and the club that we managed to qualify for the promotion fixtures in October. I am hopeful that, if we managed to play so well after only six weeks of having padel courts at the club, we can do great things in London with four more months of practice.