Congratulations to tennis member Dr Rod Jaques who was made an OBE in the New Year Honours List for medical services to Olympic and Paralympic sport. 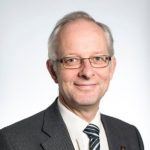 Rod is director of medical services at the English Institute of Sport and has worked with over 40 sports on the medical care of injury and illness in athletes.

Rod has attended the Atlanta, Sydney, Athens, Beijing and London Olympics with Team GB, and the Kuala Lumpur and Manchester Commonwealth Games with the England Team in a clinical capacity.

He has held medical positions with a wide variety of sports, including British Triathlon, England Netball, GB Modern Pentathlon, GB Bobsleigh, Gloucestershire County Cricket and Gloucester Rugby, and was President of the Faculty of Sport and Exercise Medicine from 2012-2015.